Our day started with three Jehovah’s witnesses, two plumbers, and one dog in heat. That would have been enough for any normal family, but my overachieving 18-month-old decided to stuff some peas up her nose during dinner for extra excitement.

The shenanigans started while I was helping my husband clear the table. I picked up a plate and some silverware and took literally ten steps to the kitchen.

“Mama!” I could hear my six-year-old giggling from the dining room.

“I’ll be right back, Sweetie,” I responded. My husband was filling the dishwasher. “Dinner and dishes? I’m pretty lucky!” I said, smacking his rear end.

“A what?” I sighed and rolled my eyes before handing him my plate. Then I turned and walked casually back to the table. I know my youngest daughter is a trouble-maker. She’s like a cat, cute but sneaky. My oldest, Rey, was stifling laughter with her hand when I arrived. The baby had a bright green pea protruding from her left nostril. I snorted. “Grab my phone babe, I need to document this,” I said, along with every other great parent when her child had gotten herself into trouble. My husband ‘carefully’ tossed me my phone before returning to the kitchen.

I snapped the photo, then pushed on her nostril, popping the pea out faster than one of those machines that pops out tennis balls.

“Taken care of,” I pretended to dust my hands.

“Wait Mama, there’s more!” my oldest shouted. She likes to exaggerate, as most kids do.

“I’ve told you before not to tell stories.”

“Mama, I mean it. Look! Look!” she jumped up, pointing and shrieking from the other side of the table. I decided to entertain her and peek. I reclined the high chair and peered up the baby’s nose to find yet another pea. It was within pinky-reach, so I quickly pulled it out.

“Well that’s enough fun for me,” I sighed and walked away, wondering if it was too early for a gigantic glass of wine.

“Mama, I think there’s another one,” my oldest had gotten up from her chair. She had one eye closed while pushing Ash’s nose up, stretching the nostrils wider for a better view. “I see something green!”

“Stop being silly,” I admonished. “It’s probably a booger.”

“No really, Momma! I’ll get Daddy’s flashlight.” She ran to the kitchen, came back with a tiny hand-held light. She shone it up the baby’s nose and there, tucked in the highest part of her nasal cavity, was another freaking pea. They were piled in her nose like lottery balls in the tube, only there wasn’t a prize to win.

“My dear God,” I whispered. “Only my child.” I pulled her out of her highchair and attempted to plug the pea-less nostril whilst blowing into her mouth to get it dislodged. Nothing. I used a nasal aspirator. Nope. That stupid little pea was stuck.

We put out a call on Facebook for tips on dislodging objects from body parts, because the people on Facebook are always right. Right? Not surprisingly, nothing helpful came of that, either.

“I don’t know what to do,” I said to my husband. “Maybe it will just fall out on its own?” After many trials, no luck, and a frustrated baby, I called it quits and put both kids in the tub.

A while later, my husband popped his head into the bathroom. “Do we have juice boxes and duct tape? I have an idea.” Good ideas don’t normally start with duct tape, but my husband is resourceful, so I gave him the benefit of the doubt.

“Check the kitchen,” I said, drying off the kids.

When I came out of the bathroom, he had duct taped a juice box straw to a sippy-cup lid and to, finally, the vacuum hose. “This is going to work. I know it,” he said. 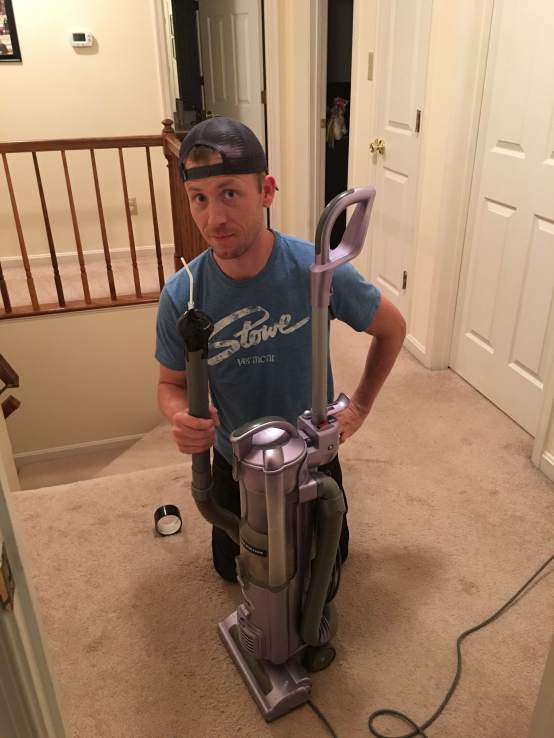 “Wait. You want to vacuum the baby’s nose? Are you alright?”

“Yes and yes. You hold her down. Rey, you hold her arms and I’ll use the juice box straw to vacuum out the pea. Are we ready?”

“Oh boy,” I said. “I guess we don’t really have a choice.” I laid Ash on the bed, straddled her gently and held her face so she couldn’t move. Her cheeks were squished together like a little Cabbage Patch Doll. My eldest daughter held her arms firmly in place and my husband carefully put the tiny white straw in the end of her nose. I held my breath as the vacuum hummed, coming to life.

I bit my lip and squinted my eyes, praying that it would work. He slowly pulled the straw back, nanometer by nanometer. Time seemed to stop as more and more of the straw became visible. When the end of the white plastic was finally pulled from her nostril, I could see a tiny green pea stuck to the end. The three of us erupted in joyful hoots and hollers.

Kids do stupid stuff. All the time. And some of the stuff is stupider than other stuff. This, amazingly, sums up  what six years of parenting has taught me. So if anyone needs a vacuum attachment for removing small objects from children’s small body parts: noses, ears, etc., I have one and it works like a charm.